Is that weird? I don't know how it is for other authors, but I tend to go where the story is, and sometimes this leads me to share headspace with some people who are just irritating or downright offensive. I'd like to think this helps me cultivate empathy, but it's also really, really annoying. It can also be difficult to try to wrap my mind around a viewpoint that's far, far removed from mine. If that's part of the story, though, that's my job, so I do my best and let the chips fall where they may.

The Other Man is a title near and dear to my heart, though I can't say I'm overly fond of Andrew, the main character. He's blue collar working man and I've grown up in a family of those, so you'd think that'd give him some leeway with me. Nope. His desire to conform, his hunger for the typical, apple-pie American dream, his constant excuses for why he's the victim in his situation, his condescension of others - even his own family, and his paranoid worry about people who aren't like him...it was hard to write, to say the least, especially knowing what was coming with the ending and how it could potentially be viewed.

The idea of a man unnerved by his wife liking a particular rock star actually came from personal experience - I've known a few people who have actually had to end relationships because their significant others didn't agree with their taste in something or other. One in particular actually broke up with their significant other because of a singer they'd never met, never interacted with, but happened to like a lot. It wasn't to the point of being unhealthy of obsessive, but their partner made a constant deal about feeling like they were living with the singer and didn't measure up. I showed my friend the manuscript before I ever considered publishing it, and thankfully they have a sense of humor and loved it, even if the overall situation was far different than theirs. Still, what the ever-lovin' heck have we come to if we have to bully a person over their musical tastes? It's still a surreal thought to me.

I've had the experience where I felt like I was being changed or encouraged to change so the other person would be more comfortable, to the point where I just didn't feel like myself anymore. It's a horrible feeling, one I never want to revisit. I really wanted to play with this overall idea, but I also didn't want to make it a gag or a gimmick or some punchline at the end. There is a twist, but hopefully the reveal is  a release of tension and a moment of epiphany and not a gimmick. I'd hate for it to be viewed that way, because at the end of the day, I think we all hide parts of ourselves. Andrew just does it in a very vehement, spiteful way.

Maybe he irritates me because I can understand being disillusioned. You know how it is, we're filled with all these notions as kids to the point we think we can conquer the world as teens, and then we have the rug pulled out from under us. Maybe my discomfort is that I have to acknowledge that I get Andrew's general frustration, even if I don't agree with his motives. I think that helps, though, it keeps him entitled but not a complete monster, or at least hopefully helps the reader look at him with disappointment rather than all-out hatred. He's a good talking point for a character: at what point do we have to get over our life frustrations and try to do the best we can, to what point do we have a right to be disenchanted with how our lives have gone?

His family doesn't make it easy on him, mind you. Granted, they're not terrible, but young kids are weird, and I may have based some of their behavior off mine as a kidlet to make things extra weird. You're welcome. His wife is Ivy League but opted to be a stay-at-home mom, a decision he never quite stopped resenting, because his own background is somewhat less in his eyes. It's an interesting dichotomy, he sees her as above him, worries about what secrets she may harbor, but also knows how to press her buttons, even though everything seems to press his. He's interesting, Andrew. He's irritating and I disagree with his fatalistic attitude, his black-and-white clear cut view of the world, his judgment of people. I disagree with him and he angers me at times....but oddly, I'm glad I wrote him, because he's also, hopefully, a character that will leave people thinking and talking.  If he got me thinking about how I could be a better person and how I can better channel my frustrations, hopefully he can do the same for others. Plus, his kids are hilarious and amazing, so there's got to be some potential in him somewhere. 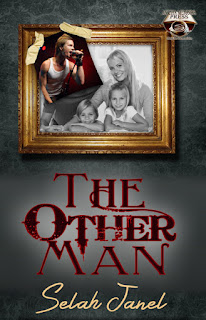 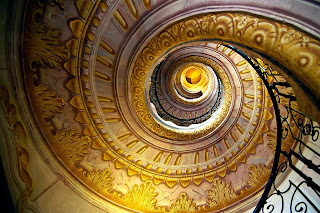 Life is a story in progress.

Character development is key, I guess.  Probably never as free-form as you'd like it to be.  Life, like writing has its rules.  Set the stage.  Set your goals.  The character is tested and grows (hopefully) as the story unfolds.  And, the story continues stage by stage to its inevitable conclusion.  But, the ending can be a surprise, good or bad.  It can be comedy, romance or horror.  Or, maybe something that nobody is ever going to understand or buy.

So, you're left with the question of whether to write the story that comes out of you, or the story you think others will want to buy.  Sometimes, the self-defining challenge may lie in the second option, if you can pull it off.

I used to just sit down and write, for my own sake.  An idea would germinate and grow, and I'd just let it out.  Lately, I find myself pulled in so many other directions.  In seeking to promote existing stories of mine, I seem to spend more time reading, reviewing and promoting other people's books than working on new projects.  But, I also find myself hopping on every bandwagon that passes, dashing off short stories for contests or special projects I hear about through writer's loops or other contests.  That part I like, because it sharpens my skill as a writer by making me answer the challenges others set.  (I just signed a contract for a short story in a sci-fi anthology; always a good feeling.)

Writing, like life, is about survival.  Nobody buys, you don't survive.  'Gotta' sell yourself.  If you don't know how, you gotta' learn.  If you're lucky, others will help, but it's on you.  The hardest part is finding the right audience, the right reviewer, the right showcase.  You often find yourself in company with writers that are going in decidedly different directions.  You try to learn from them, but you wonder if the audiences they sell to are ever going to get your stuff.

And, like life, it's a journey, for better or worse.  At its end, you find only yourself.  I'll always write first and last for myself.  Whether I succeed or fail, it just feels like that's what I have to do.  It's just getting back to the basics.  I've got some ideas I've let gather a bit too much dust.  Time to do a little cleaning and salvaging in the attic.  Wish me luck.
Posted by Tom Olbert at 6:00 PM No comments:

Today, I am going to show you something that might seem a bit off topic. And, frankly disgusting...I admit that. But in the end, you will see how it relates to writing, and never giving up on the dream!

Okay, so our bathroom shower has a textured floor. I could NOT keep it clean. Finally, I gave up. After straight bleach didn't work, I despaired of ever getting it clean again. At the worst, it looked like this: 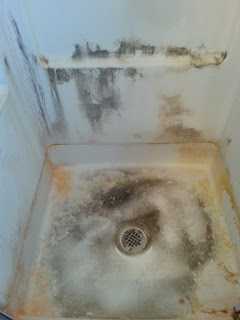 I warned you...disgusting! (I know, you want nothing to do with me ever again, now...)

But I kept trying. I tried EVERYTHING I could think of. And I finally hit on the trick. Dow Scrubbing Bubbles, left on for hours before rinsing. (They say a few minutes, but hours work better. I have been spraying them on in the morning after our showers and leaving them till bedtime.)

Little by little, it began to get better. Last night, when I rinsed the floor, it looked like this: 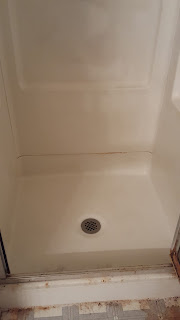 As you can see, there is still work to be done, but the difference is AMAZING!

But what does this have to do with writing, you ask? It's a metaphor, son...

A lot of times, our first drafts are like the Before picture. Nasty, ugly, wretched things that you feel a bit embarrassed to show your best friend, much less the world. You feel like giving up. It's too much work to figure out a way to fix it. You try everything, and nothing makes it better.

But somewhere, underneath all that crud is something clean and lovely. "Never give up, never surrender!" as the Galaxy Quest cast would say.

Maybe you need a new point-of-view. Try rewriting it in first person instead of third.

Maybe you are telling the story from the wrong character's perspective. Try rewriting it in another character's voice.

Polish and elbow grease are the best tools for success. Tweak one aspect of the story and send it to a pair of fresh eyes. What does your new beta reader say?

Don't forget the rich tradition of rejection after rejection until an author hits the right editor at the right moment and becomes a Household Word. :)

And don't forget that crucial step of letting a project rest for awhile before doing more clean-up. It can save you a draft or two. ;)