Mocha Memoirs Press is pleased to bring you this year's submissions for the Women In Horror Month Flash Fiction Contest! Authors were asked to submit horror stories of less than 1000 words that featured a female protagonist. We had over twenty submissions and each one is more bone-chilling than the last! So read to your heart's content!

Voting is NOW OPEN!!!  Use the form below to vote for your favorite of the TOP TEN!!


**The following stories have ADULT content. Not for readers under 18!**
** Stories have been edited for formatting only.** 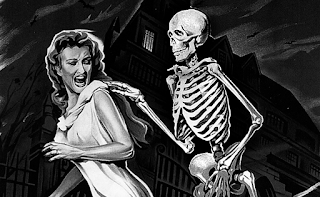 Ann Woke to Voices by Rachel A. Brune


Ann woke to voices. Which was strange.


The whispers came through an expensive wireless speaker, tinny behind a wall of static.


Before she was fully awake, she could piece together a few words out of the flow. Once her eyes opened and she focused on her blinking alarm, all she could make out was a rasping cough of white noise.


As always, Ann woke with a headache. The morning routine took her about as long as it took for her generic coffee to finish dripping into the carafe. The coffee went into the green Thermos, clouded by just enough half-and-half to turn the liquid a rich caramel color, but no sugar. Ann unhooked her wireless speaker from the charger and headed out the door.


Slamming the door on the Chevy Cavalier was out of the question. Mistreated, and it would fall right off. Not that Ann would mind the breeze, but someone would probably steal the radio. She plugged the phone into the tape deck converter and hit shuffle for the twenty-minute drive to the train. She wondered what she had downloaded that would come out like static.


* * *
Ann’s boss was the heroine of a chick lit novel. She had a framed copy of cover in her office, modestly positioned on the far wall, to the back of any potential visitor. It was signed by the author, a student intern from NYU who had spent a summer at the office, and watched the woman’s apartment twice, once while she spent the weekend in the Hamptons and the other while she attended a conference on Cape Cod.


Ann didn’t particularly care for the genre but she had read the book anyway, mostly perusing it to see if she had shown up anywhere. This summer’s intern didn’t look like he had any novels hidden inside him. He was dressed painfully fashionably, sketching ideas in a small, unlined notebook. He spoke some foreign language Ann couldn’t understand even if every word was English, with names she wouldn’t recognize if fame injected itself into her cheeks like Botox.


Ann wasn’t fashionable. She wasn’t vintage, she wasn’t college, she wasn’t hippie, she wasn’t executive, she wasn’t much of anything. She shopped at Kmart or Target or H&M, buying clothes in her size that never really fit. She had once gone into Lord and Taylor’s and tried on a fabulous dress suit. It fit perfectly, and she loved its soft folds and delicate hang, but she preferred to eat and pay rent, so she regretfully handed the suit back to the over-helpful saleswoman and left the store.


Ann plugged her phone in a charger, and her ear buds in the appropriate receptacles where they remained all day.


Ann’s boss liked the slides but not the first, sixth, eleventh and twelfth. Ann revised them and emailed the presentation to her boss. It caught on the virus scanner, then the spellchecker, finally vanishing off the screen. The static returned.


She twisted the ear bud jack. The clicks still plagued the end of the song; Ann swiped her playlist to move ahead.


The sound separated. The static pulsed—long crescendo and two smaller beats. Slow, fast-fast. Ann took out the ear buds. She restarted her phone, waiting for the device to reset itself. Swigged warm coffee straight from the Thermos and caught her chin in the palm of her hand before it dripped on her sweater. The air conditioner blasted and she kept the sweater at the office to wear when it penetrated. It bore the battle scars of previous Thermos swigs.


Static blasted into the open office. Ann fumbled with her phone, trying to lower the volume. She plugged the ear buds back in, ignoring the looks, and the static settled down to a low hum. Slow. Fast-fast.


Ann put her phone into her bag and passed the rest of the day in silence, except for a brief conversation with the fashionable intern, in which she realized he was another college student bound for greener pastures where men and women dressed better and wrote fashionable novels.

Ann didn’t listen to anything on the train ride home. From her bag, she imagined she could feel the static. Slow. Fast-fast.


It was a weeknight. Nothing was scheduled. Ann was halfway through a Michael Connelly novel. She read through dinner and left the book on her bed while she showered, the place marked with a takeout menu from the restaurant she had ordered the teriyaki chicken. She hated bending the spine of books, even paperbacks, and tried not to get them all greasy and fingerprinted.

Showered, combed, powdered and lotioned, Ann restarted the phone, turned on her music app, and connected the phone to her wireless speaker. She thumbed through various options and checked the alarm to make sure it was set for the correct time and playlist. She chose an album of soft jazz to fall asleep to, picked up her book.


A small light on her bedside table cast a small yellow glare. It was a Wal-Mart special and had cost less than ten dollars. It was black with a bendable arm and a switch in the base.

Three chapters from the end, Ann closed the book. She placed it on the table and clicked the light. Her eyes and mind started to drift shut.


In the speaker, a soft static glow began. Ann groaned mentally and pulled the blanket over her head. Crackling, the white noise broke through and obliterated a clarinet solo. Slow.


Defeated, Ann threw her blanket away, sweating slightly, listening to the speaker pulse in the peculiar three-count pattern. Fast-fast.


The static paused, resolved. A breath drew. “Please. Help me.”


Ann gave the phone to her sister. She sold the speaker on eBay. She used the money to buy a new alarm clock and a pair of jeans from Lord & Taylor that were her size and fit.


Nothing strange ever really happened again.

And Da' Bitch Came Back by Acquanetta M. Sproule


(Originally Published May 24, 2011 on http://flashesinthedark.com)

The pain from the first head shot was so excruciating that MoXambeeqwa jumped clean out of her skin!  So, she didn’t much feel the second bullet, or the third.


Terrence was nothing if not -thorough…


She’d been the only one Terrence had let call him by his given name, which had given MoXambeeqwa more than a little status in the ‘hood.


Until he’d gotten tired of her, and she hadn’t had the good sense to take the hints, and step aside voluntarily.


“What if we ain’t-finished- by then?” asked Clown Boy.  The rest of the pack backgrounding a hyena chorus.


Terrence walked out of the door. The pack’s chittering grew. MoXambeeqwa watched, only for second, then fled outside, phasing through the time-ravaged wall. She floated backward over the rickety porch, the astral glow surrounding her including colors for which she had no names.


It occurred to her that she was a lot less upset about having just been murdered than she might have thought she’d be. Dying, she decided, was so much more stressful than being dead.


Realization of movement roused her. Dilapidated houses, hoopties, weed-filled yards and the faces of world-worn folk trained past her. Only habit turned her in the direction she was traveling, which happened to be in the same direction that Terrence was leisurely pedaling.


A matter of interest. But not much.


Terrence wheeled through an alley, expertly dodging debris.  He slowed enough to toss a small, plastic bag into the liquor store’s dumpster, then cruised on. Soon, he pulled into his mom’s front yard, leaning the bike, unchained, against the house.


Once inside, he slammed the door through MoXambeeqwa, pausing momentarily to scan the perpetually spotless living room for any errant dust flecks. “I’m hungry,” he told the reed-thin woman trembling there, as he strode into the kitchen.


MoXambeeqwa felt more than a twinge of annoyance.  She’d never liked how Terrence treated his mother and had frequently told him so. Nobody should be terrified of their own child, in their own home. “W-w-would you like something to hold you?”


“No, I want you to have my dinner ready when I come in,” Terrence told her, quietly. MoXambeeqwa had never heard Terrence raise his voice. He never had to.


Terrence’s three younger brothers silently entered the kitchen, took their assigned places, sat very, very still. Hovering behind the eldest of the three, MoXambeeqwa noted that her aura had settled into a throbbing ember-red. Apparently, Terrence noted it, too. He looked over the head of his eldest-younger brother, locking glares with MoXambeeqwa.


Fury blasted away the last of her lassitude! She jammed one ghostly fist on one ghostly hip, cocked her shakin’ finger into the ready position! Terrence twisted his lips into a rare smirk, then gasped! He twisted right, grabbing at his spindly mother! But, she scrambled past him and, yanking his eldest-younger brother from his own chair, huddling with him in the kitchen corner furthest from Terrence! While reveling in Terrence’s distress, the oddest idea popped into MoXambeeqwa’s mind. Couldn’t hurt, she told herself, seein’ as how I’m already dead! She reached into Boss Ice’s chest, grabbed the blade his mother had so obligingly jammed into his back and jerked the whole butcher knife completely out through his front!


Loud, raucous laughter interspersed with pounding and kicking on the front door distracted her. “BOSS ICE!  WE HERE!  SEND DA’BITCH TO LET US IN!”


“Kah-lown Boy…!” MoXambeequa willed the front door open, waited until the whole pack had trooped in, slammed it shut! She took a moment to knock off the phone receiver and psychically punch nine-one-one, before wafting the blood-coated knife handle over to Clown Boy’s palm and, clamping his fingers around it, pounced him on the rest of the recently late Terrence’s former pack!