New Thriller! The Scream of the SIren by Jessica Housand-Weaver 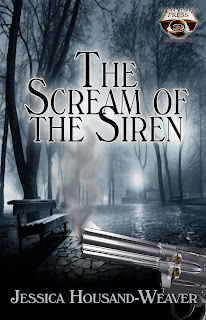 If you like a thriller, than no author we have weaves a better tale than Jessica Housand-Weaver.  Her latest release, The Scream of the Siren, is a psychological thriller that will keep you at the edge of your seat and double checking your locks when its over. This isn't your 80s campy, ketchup-blood horror. This is a cerebral thriller. We invite you to put your courage to its sticking place and try it today.
ISBN: 978-0-9831934-6-3
Genre: Psychological Thriller/Horror
Purchase: http://www.lulu.com/product/ebook/the-scream-of-the-siren/15218670
Blurb: Jen Hanover, depressed and reclusive after her husband's suicide, finds her life changed forever when she meets a mysterious, brooding rebel named Alejandro. At first, he seems to be exactly what Jen needs. But things quickly spiral out of control as Alejandro reveals the frightening extent of his obsessive nature and violent past. Desperate to end the dangerous affair, Jen is determined to be free of him. Yet the more she tries to escape from Alejandro's passionate clutches, the more threatening he becomes. The story unravels with heart-pounding suspense as Jen finds herself up against a criminal mind, far more dangerous than she could have ever imagined. In the end, Jen discovers not only the darkest truths about love and the human condition, but must also face the lurking demons within herself.
Posted by Mocha Memoirs Press, LLC at 8:20 PM 1 comment:

New Release: Secret of the Tunnel Behind Van Gogh's Ear 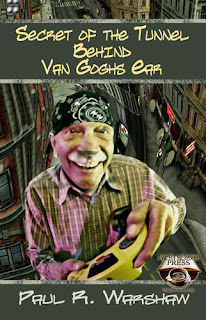 Mocha Memoirs Press is excited to announce the release of our latest science fiction/humor story, Secret of the Tunnel Behind Van Gogh's Ear. We're proud of our speculative titles and we invite each of you to try our stellar sf titles.
Blurb:
Stand-up-comedian turned restaurateur, Herman Tushman, attempts to prolong his life following a cancer diagnosis by allowing scientists to build a mysterious Creationizer machine in the basement of his Chez Pentecostal restaurant. Before the machine is completed, all scientists save one die strangely. Convinced he's next, Herman becomes hyper-vigilant, but dies anyway, perhaps murdered. Using cryptic clues Herman left behind, his computer-savvy wife, Miriam, programs the Creationizer to rebirth her husband. But the machine misfires, and Herman materializes not on earth, but inside a cyberspace video game populated by gang bangers. To rescue Herman and expose the conspirators behind his death, Miriam enlists the support of her slovenly, sexpot daughter, Rose, and Rose’s teen daughter, Popcorn. The trio confront assorted real and surreal, life-threatening challenges from oddball nasties whose connections to Herman’s life, death, and cyberspace predicament remain a mystery until the shocking end.
Enjoy!
Posted by Mocha Memoirs Press, LLC at 12:45 PM No comments:

Look What Miriam just released...If Only 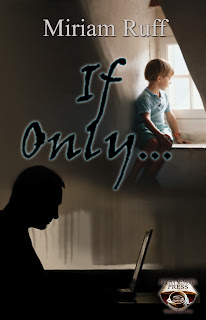 Title: If Only
Author: Miriam Ruff
Publisher: Mocha Memoirs Press, LLC
Purchase Link: http://stores.lulu.com/mochamemoirspress
Genre: Psychological Horror
ISBN: 978-0-9831934-7-0
Price: 42.99
Blurb: A disfigured man develops a friendship over the Internet, but when the two finally meet, events take a surprising turn.
Excerpt
Nathan’s workstation was clean, as if it were prized above all his other possessions; the rest of the room was a disaster. Clothes, disks, and empty food wrappers lay everywhere in disarray, the shelves bent under the strain of the books heaped on them, and numerous bottles of pills covered the counter top. Under piles of clothes in another corner of the room stood a television and a radio, both blaring loudly, but tuned to nothing in particular; they were simply a source of white noise to fill the room. Yet oddly enough, there were no mirrors, as if the apartment hid a man who did not want to be seen in the light, even by himself. Of average height and build, with brown hair and wearing a T-shirt and jeans, he seemed in many ways the most unremarkable object in the entire space.
His computer, though, sported numerous remarkable enhancements, including digital and
Web-based cameras, specialized software, a voice synthesizer box which was now silent, and a video transmitter. With a movement that looked like a fluid cross between a rock star and a talk show host, Nathan leaped in front of the computer, turned it on, and grabbed a laser pen from the desk. Pretending it was a microphone, he spoke into it, his hands gesticulating wildly and expressively, his voice resonating – a strong, captivating, well-modulated sound.
“And here we are, live once again, with our fabulous host Nathan Drake. Handsome, suave, debonair, men envy him; women love him. He’s every kid’s dream come true, and he’ll take you on an unforgettable journey into realms no one’s ever explored. Ladies and gentlemen, here with his Pentium dream machine, is Nathan Drake!”
﻿
Posted by Mocha Memoirs Press, LLC at 2:19 PM 2 comments: We'd like to congratulate one of our amazing authors, Janet Eckford, for receiving 4.5 from Bookwenches. Here's a brief excerpt from the review. To read the entire review, go here.
"I Heart Geeks is absolutely adorable. Take some humor, a sexy Geek, a gorgeous Geek-lover, and roll it all into one, and you come up with a winner. This story grabbed me, tickled my funny bone, and made me thankful I picked this up to read. It is well-written with quirky twists that just make it fun....Ms. Eckford has done a wonderful job telling a story that is feel-good and sassy. I will be hunting down more of her work soon."--Teagan Boyd
Congratulations, Janet. We're super proud of you.
Posted by Mocha Memoirs Press, LLC at 8:21 PM No comments: